Universal Pictures will release the new film “Cocaine Bear” on Friday, Feb. 24, 2023 in theaters wide, the studio announced on Monday.

Wild as it may seem, the film is inspired by the 1985 true story of a drug runner’s plane crash, missing cocaine, and the black bear that ate it. Per the official synopsis, the thriller finds an oddball group of cops, criminals, tourists and teens converging in a Georgia forest where a 500- pound apex predator has ingested a staggering amount of cocaine and gone on a coke-fueled rampage for more blow… and blood.

The February release date for “Cocaine Bear” puts it one week after the release of the Marvel sequel “Ant-Man and the Wasp: Quantumania” and one week before Paramount’s “Dungeons & Dragons” movie. 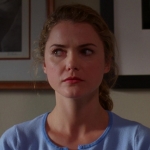 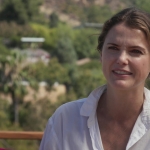 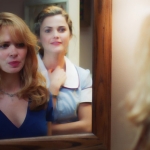 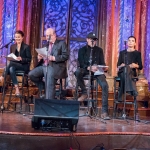 Most of us will have a War On Drugs moment at some point in our lives. Over five zeitgeist-altering albums—epic in their emotional scope and sonic depth—the Philly-born band has earned a reputation for encapsulating the near-univeral sense of uneasiness and exuberance of coming of age. Formed in 2005, the band has become a cornerstone of contemporary Americana, and has collaborated with the likes of Kurt Vile, Sharon Van Etten, and The National. For Adam Granduciel, the band’s lead guitarist and front man, shepherding The War On Drugs in its various configurations has been the singular focus of the past 15 years. “There was a beautiful aimlessness to that time,” he recalls on a recent Zoom call, “But I wouldn’t want to go back to being 23.” This shift is evident in I Don’t Live Here Anymore, the latest of the band’s five albums, out last week, which embraces a certain rock n’ roll jubilance that was scarce on previous records. The new record offers bite-sized melodies and tighter lyrics where albums like 2008’s Slave Ambient or 2010’s Lost in the Dream thrummed with expansive guitar riffs and stifled, impossible-to-encapsulate feeling. Granduciel attributes his new sound to the birth of his son, Bruce. After more than a decade of touring, fatherhood has had a clarifying effect: “I can write about the same things that I did in my 20s,” says Granduciel, “But I know what I’m singing about.” Below, the musician talks with his new friend and mega-fan, the actor Keri Russell, about his upcoming tour, the art of improvisation, and being 42. END_OF_DOCUMENT_TOKEN_TO_BE_REPLACED

Adrienne Shelly was an actress, a director, a mother, a wife, and a friend, and her life was cut terribly, unthinkably, unjustly short on Nov. 1, 2006, when 19-year-old construction worker Diego Pillco broke into her apartment with intent to rob her and, upon being discovered by Shelly, fatally strangled her and then hung her in the bathroom in an attempt to make it appear that she’d committed suicide. Those are the gruesome details of Shelly’s death, and they’re not shied away from in Adrienne, a new documentary premiering on HBO on Dec. 1 following its debut at the DOC NYC festival on Nov. 14. Yet as directed by her husband, Andy Ostroy, this non-fiction remembrance is less about the horrors of Shelly’s final day than about the inspiring brightness of her life—and, also, the tremendous grief wrought by her untimely demise.

Ostroy serves as the on-screen narrator of his late wife’s story in Adrienne, turning the film into both an act of grappling with perversely arbitrary tragedy and a celebration of her many roles. The most public of those was as a rising star, as Shelly made an instant indie-cinema name for herself in Hal Hartley’s The Unbelievable Truth and Trust. Those lead parts were showcases for her vivacious personality and determined toughness, the latter of which shone through despite the fact that she was pretty and petite (standing only 5′ 2″) and thus, easily objectified by film industry chauvinists as a dainty sexpot in need of manly protection. Not content with simply being an actress, however, Shelly—after a series of less-than-fulfilling projects—quickly gravitated to working behind the camera, peaking with 2007’s Waitress, which became a Sundance hit a couple of months after her death.

Waitress has continued to have an amazing life of its own as a popular Broadway musical, and early in Adrienne, Ostroy asks patrons waiting to enter the theater if they know his wife. That they don’t recognize her name (even though it’s on the marquee) is merely another in a long line of pointed jabs suffered by Ostroy, and underscores his own motivation for making this documentary: namely, to maintain her memory and, in doing so, to provide her with the acclaim and respect she deserved. To that end, he presents numerous clips from Shelly’s films and self-directed shorts, behind-the-scenes footage from her productions, photos of her on stage, interview snippets from the 1990s, and never-before-seen home movies, confessional recordings, and scenes from a still-in-the-works documentary she was making in and around NYC about the quest for—and nature of—happiness.

In those archival moments, Adrienne captures the joy that Shelly brought to every professional venture she undertook and the euphoric delight she felt for her daughter Sophie, who was only 3 at the time of her death. Now a teenager, Sophie joins her father in speaking candidly about Shelly’s absence, as do Shelly’s mother, friends, and famous collaborators, all of whom still seem stunned—and devastated—by her unimaginable fate. From Keri Russell and Paul Rudd to Jeremy Sisto and Hal Hartley, colleagues are effusive about her talent, with her The Unbelievable Truth co-star Robert Burke stating, “She was a complete unicorn, as far as I was concerned.” They also have high praise for the courageous feminist attitude that she brought to all her endeavors, notably Waitress, which was ahead of the #MeToo curve, and whose second life in musical form stands as a testament to the universal appeal of its forward-thinking spirit.

Adrienne’s tribute to Shelly constantly feels as if it’s being delivered through teary eyes, and that culminates with the film’s showstopping final passage, in which Ostroy visits Pillco in prison to understand what really took place on that appalling November day and why, and also to show the killer precisely what he stole from everyone. Through a translator, a seemingly repentant Pillco explains how his robbery of Shelly’s apartment—a frequent practice of his, since he was deep in debt—turned homicidal when the actress caught him mid-theft and attempted to call the police (Pillco was an undocumented immigrant from Ecuador). Ostroy and Pillco’s encounter is predictably wrenching, for us as well as for Ostroy, who forces Pillco to look at photos of his wife—with himself, and with young Sophie, including a snapshot taken on Oct. 31, 2006, the day before her murder—and then, overcome with anguish, cuts off the chat.

For those that didn’t get quite enough jumps during the Halloween season, Searchlight Pictures has announced that Antlers is on its way to Digital on December 21, followed by a Blu-ray and DVD release on January 4, 2022 for all of your thriller needs.

The film, which is based on a short story by Nick Antosca, centers around a small town in Oregon that is filled with dark secrets and urban myths surrounding a horned beast called a wendigo. The secrets begin to come to light when they are uncovered by a teacher (Keri Russell) and her sheriff brother (Jesse Plemons) as they attempt to give aid to a disturbed young boy. When the brother and sister duo start to dig deeper into the at-home goings-on of the boy’s household, they stumble further into the darkness towards a supernatural entity.

The film was directed by Scott Cooper (Hostiles), who also wrote the screenplay alongside C. Henry Chaisson and Antosca. Scare king Guillermo del Toro (Pan’s Labyrinth, The Shape of Water) served as producer for this spine-chilling, monster-centered horror flick.

Be sure to get your hands on Antlers when it comes out on Digital December 21 with a Blu-ray and DVD release to follow on January 4, 2022. Check out the Blu-ray box art as well as the full list of special features below:
– THE EVIL WITHIN: Co-writer/director Scott Cooper gives us a glimpse of the many complex layers at play in his approach to making Antlers, a horror film about very human concerns, and his most ambitious film to date.
– AN EXPLORATION OF MODERN HORROR WITH GUILLERMO DEL TORO: Producer Guillermo del Toro traces the lineage of elevated horror in cinema. Employing his encyclopedic knowledge and passion for the horror genre, he discusses the connection between mythology and human behavior.
– ARTIFACTS AND TOTEMS: The filmmakers discuss how they created this world of a small, tight-knit Northwest community of working-class Americans in bringing Scott Cooper’s vision to life.
– GODS WALK AMONG US: An in-depth exploration of the digital and practical effects used to create the film’s primal creatures.
– CRY OF THE WENDIGO: Discover the fascinating folklore behind the wendigo from the film’s First Nations consultants. Learn about the creature’s mythic origins and about its connection to man’s betrayal of the land.
– METAMORPHOSIS: At the center of Antlers is a transformative performance by Scott Haze. Hear about the actor’s preparation for filming, including how he lost some 70 pounds in order to play a deeply tragic character.
– COMIC-CON @ HOME WITH SCOTT COOPER AND GUILLERMO DEL TORO: Steve Weintraub moderates this candid Comic-Con@Home 2020 Panel interview with Guillermo del Toro and Scott Cooper. Hear the filmmakers describe their process, and learn who some of their filmmaking heroes are.

Russel, who has starred in “The Americans” and “Felicity,” plays Olivia Drew, a gun for hire. She is repped by WME, Burstein Company, Sloane, Offer, Weber and Dern and Viewpoint. 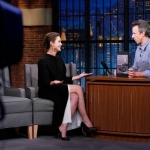 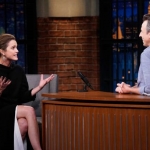 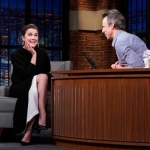 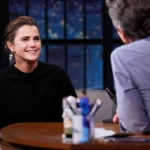 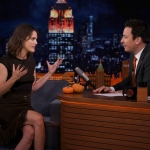 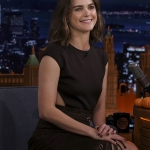 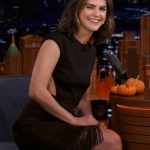 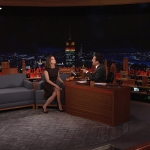