The cast of Star Wars: The Rise of Skywalker received a standing ovation as they took the stage at D23 in Anaheim Saturday. Filmmaker J.J. Abrams said the team was hard at work on a new trailer, but weren’t quite ready, so they showed off a sizzle reel.

The footage included a fleet of dozens of star destroyers in the atmosphere of a planet. Rey (Daisey Ridley) and Kylo Ren (Adam Driver) appeared in a later scene, fighting on a downed ship in the middle of the ocean as waves crashed around them. The biggest crowd pleasing shot occurred at the end of the reel, with Rey wearing a dark hood, sporting a double lightsaber. The footage hasn’t been released online.

The presentation also gave a first look at Keri Russell’s mysterious character, who sports a helmet and a red suit. “She’s very cool and a little bit shady. She’s kind of a criminal, and an old friend of Poe’s,” Russell said.

Oscar Isaac, who plays Poe, pretended to comfort his co-star John Boyega. (Online, fans have expressed a desire for the two to have a romantic relationship.) “We were young. Everyone was experimenting,” said Isaac to Boyega, who pretended to be upset. 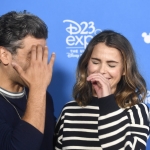 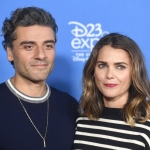 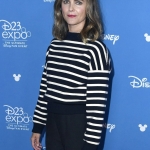 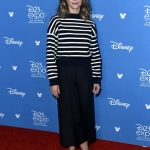